So, a minute on the internet looks like this:

I don’t know about you, but I’m exhausted.

In this noisy, competitive digital world there is still only one letterbox and the power of you putting a printed communication through that letterbox should not be underestimated.

Record-breaking double digit increases in the effectiveness of direct mail and door drops during the Covid crisis.

During the various lockdowns, our media habits were forced to change with much coverage given to the changes across the digital and broadcast channels, but what about the channel that is always present in the home? 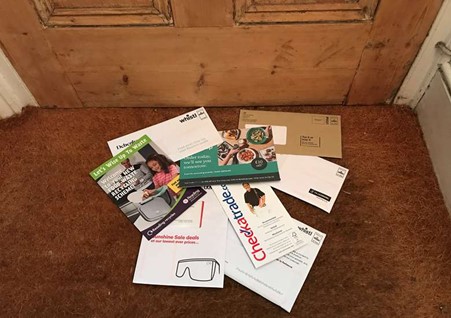 The latest data from the Joint Industry Committee for Mail (JICMail), shows that with more time at home, consumers have increased exposure to their direct mail and door drops and its ability to drive engagement and sales.

The various channels all recorded significant increases in the amount of time they live in the home with all three effectively extending their lifespan by a day year-on-year:

During that time, they are shared with family members and friends.

The JICMail study, which is captured from a monthly panel of 1,000 households, also highlighted the positive impact that government and health mailings had had on the overall statistics, with, unsurprisingly, interaction with government and healthcare mailings increasing 45% and 11% respectively.

Capitalising on the effectiveness of mail and demonstrating its contribution to multi-channel campaigns is integral going forward if marketers are to make the most of this opportunity.

Looking to increase your client base?

If so, why not try the wonderful medium of door drops.

Door drops are leaflets or flyers that are not personally addressed to the householder. They are cost-effective and can be targeted locally or nationally. As mentioned above they are now more relevant than ever as this physical channel can reach potential new customers at home.

As a channel, door drops have a number of unique benefits:

It’s benefits like these that make them such an effective channel when it comes to client acquisition – whether you need to do that locally or on a national scale.

They’re also cost-effective because you can target them so precisely. For instance, you can choose to deliver to households by specific postcodes or by particular demographic selections. The majority of the country is covered, meaning there is the option to target up to 30 million homes.

How about partially addressed mail?

Using GDPR compliant household data, instead of addressing the mailing to an individual your campaign can be addressed to ‘The Occupier’, ‘The Householder’, ‘Cat Lover’, ‘Shoe Wearer’, in fact anything that is going to reflect your campaign message.

Yes, that’s all very well but print is bad for the environment isn’t it?

When it comes to the sustainability of Print and Paper, it’s important to separate the Facts from the Myths.

The European paper industry is a world-leader when it comes to sustainably sourced raw materials, renewable energy and recycling rates. Yet the myths around paper are still prevalent amongst consumers.

Often the source of these misconceptions is the abundance of misleading information about paper and its impact on the environment.

Paper has been the preferred communications medium for 2,000 years. Even in today’s digital world, it continues to be highly effective and, produced, used and disposed of responsibly, is inherently sustainable.

We live in an increasingly digital world where electronic and paper-based communications coexist and are often complementary.

Print and Paper in A Digital World

An international survey of over 10,700 consumers, commissioned by Two Sides found:

Ok, fair enough, but younger people won’t take any notice of print, will they?

It is true that younger people spend a lot of time on-line but recent studies have shown that these ‘digital natives’ respond well to print and mail with 59% responding to something they have had through their letterbox over the past 6 months.

So, when you are planning your next sales and marketing campaign it is definitely worth including print in the mix and there is no better place to start than a no obligation chat with the Synergy team.

Memberships, Print
VAT relief for charities and not-for-profit organisations From Resilience to agility how membership bodies are embracing change